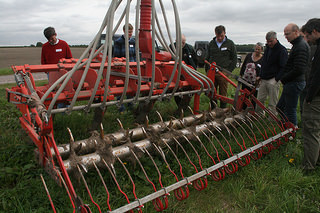 As part of the Organic Knowledge Network Arable (OK-Net Arable), ORC will be establishing a UK organic arable farmer group. We will be organising an initial meeting of the group on the 18th June 2015 hosted by Richard Gantlett at Yatesbury House Farm in Wiltshire.

Organic Knowledge Network Arable (OK-Net Arable) is an EU funded project that aims to improve knowledge exchange among farmers, farm advisors and scientists to increase the productivity and quality in organic arable cropping throughout Europe.

This first meeting will bring together 15-20 organic arable farmers from different parts of England to identify priority challenges facing organic arable cropping, potential solutions to these challenges and successful tools for knowledge exchange. The outcomes of this meeting, together with results of farmer group discussions in other EU countries, will be used to identify innovative approaches to be tested by participating farmers later in the project.

Group discussions will be followed by lunch and a short farm walk around Yatesbury House Farm during which Richard Gantlett will showcase his work with min-till techniques.