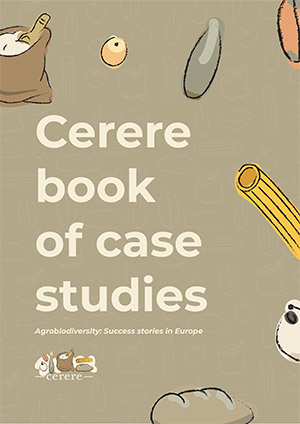 The three-year CEreal REnaissance in Rural Europe: embedding diversity in organic and low-input food systems CERERE project has come to an end.

CERERE aimed to promote innovation through diversity-based ‘alternative’ cereal food systems in European agriculture via knowledge exchange between researchers, producers and other relevant stakeholders. The CERERE project has involved strengthening of relationships at a European level between
active players in alternative supply chains in the cereal sector. The examples selected share some common principles that emerged in the project and focused on organic and low-input systems, characterised by bottom-up innovation often by collective actions or community-led.

A starting point of these ‘alternative’ agricultural systems is an optimised use of agricultural biodiversity, and the building of improved food systems grounded in agrobiodiversity itself, and consequently in the cultural identity of each region. The book contains many examples from across Europe, from Finnish buckwheat farmers to supply chains for bread from ancient wheats in Italy.

The UK examples include: