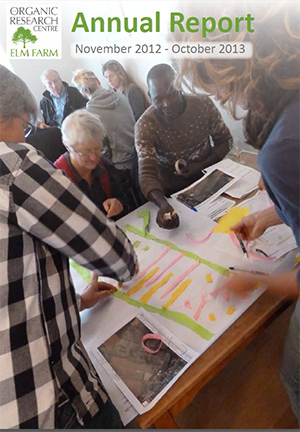 2013 saw significant progress made in restoring the fortunes of the Organic Research Centre, with increases in project funding for ORC’s own charitable purposes, in donation income and in the value of new contracts secured contributing to a significant improvement in our financial performance. Debt restructuring and the initiation of some limited land sales also helped to restore our liquidity position. The cash released by the land sales will help investment in new and refurbished buildings, with significant work planned for 2014.

During the year, some significant new ORC-led projects were started, including the EU-wide
Co-ordination of Organic Plant Breeding Activities (COBRA) project and the Welsh Government Organic Advisory Services project, which includes policy advice and certain /Organic Centre Wales activities. Both projects run from 2013 to 2016.

The five-year, Defra-funded Wheat breeding LINK project was completed, concluding a significant 12-year period of projects generating, developing and studying the performance of novel wheat populations, paving the way for a ground-breaking legal agreement to enable the experimental marketing of wheat population seed to producers. Funding was also secured for two major new EU-funded
research projects starting in 2014: Agforward, led by Cranfield University, focuses on the development of agroforestry systems, while the Wheat and barley Legacy for Breeding Improvement (Whealbi) project adds to our growing portfolio of plant breeding work aimed specifically at organic producers.

A highlight of the year was the Prince of Wales’s Food and Farming Summer School, which ORC was invited to host following a break in the series of events previously hosted by the Royal Agricultural University, Cirencester. Attended by more than 30 participants and a dozen highly expert contributors, the challenge of delivering sustain able food systems was examined in both a theoretical and a practical framework on both organic and non-organic farms, including Helen Browning’s Eastbrook Farm, Duchy Home Farm and West Woodhay Estate. The event culminated with a reception by the Prince of Wales and a visit to Highgrove Gardens. Building on the success of this event, ORC was asked to host the Summer School again in 2014.

ORC staff have also been heavily engaged with providing evidence to Natural England, Defra and the Welsh Government on the potential and implementation of organic farming and agroforestry support schemes to be implemented as part of the Rural Development Programmes from 2014-2020. ORC’s research on the environmental impacts of organic farming, the financial performance of organic farms and the evaluation of European policies for organic farming have proved invaluable in this context.