Home / News / Facts and figures on organic agriculture in the EU

Facts and figures on organic agriculture in the EU 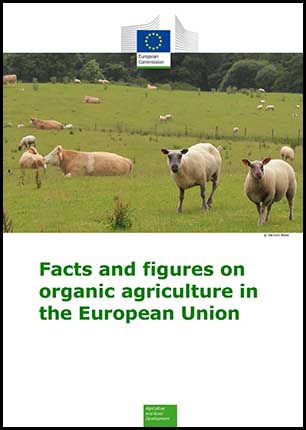 This report gives an overview of organic agriculture in the EU based on the data available and its evolution over recent years. There are more than 186 000 organic farms across the EU, cultivating an area of 9.6 million hectares (5.4% of the total agricultural area).

Organic holdings are overall bigger than conventional farms and their managers are younger. Permanent pasture represents the biggest share of the organic area (about 45% compared with 7.5% for all farm land in the EU), followed by cereals (around 15% compared with 2.5%) and permanent crops (about 13% – compared with 11% for all farm land). Data for livestock are more difficult to summarise and missing data in several countries imply that it is not so easy to aggregate them to EU wide figures. The bovine sector has a large share of the national herd in Austria (19%) and Sweden (17%) and the share of the bovine sector represents about 3% of the EU herd.

The publication states that for poultry laying hens are more important in the organic than non-organic sector with France, Italy, UK and Germany among important producers.

Important organic pig producers are Germany, Denmark and France but the pig sector holds only a minor share (0.3%) of the total EU pig production. Organic goat production can hold a sizeable share of the national herd, but is concentrated in Greece, Spain, France, Italy, the Netherlands and Austria.