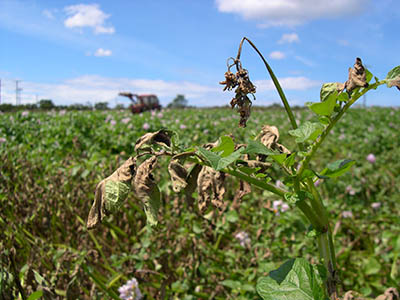 Potato blight can be combated through conventional breeding and cultural methods

Thirty-one organisations, including ORC along with some of the UK’s biggest environmental organisations, as well as farmers, scientists, seed distributors, and retailers, lodged a formal objection today to the Sainsbury Laboratory’s plans for a new open air field trial of GM potatoes on farms in Suffolk and Cambridge.

The potatoes that scientists want to plant in open fields contain several different added genes that work in different ways to control different biological functions, but the application does not consider possible interactions between these stacked traits. GM Freeze director Liz O’Neill says this isn’t good enough: “When a patient is prescribed more than one medication, their doctor and pharmacist consider the potential for interactions on a case by case basis. Here, a bunch of unrelated genes are being added to a staple food crop and assessed for safety on a simple ‘face value’ basis.”

The proposed trial also uses gene silencing techniques to ‘switch off’ the function of particular genes. Like all forms of genetic modification this can lead to off-target effects and unintended impacts. There is no agreed protocol for assessing the risk to people or animals who may accidentally or deliberately consume plants modified in this way so the objection signatories are urging Environment Secretary Michael Gove to refuse permission for the trial. As they state in the objection itself: “The GM potato field trial should be refused on the grounds that the environmental risk assessment is incomplete and, importantly, cannot be completed at the current time because of the acknowledged gaps in scientific understanding regarding potential effects on non-target organisms.”

Given the level of concern about the plants in the proposed trial, signatories to the objection have also raised a red flag over plans for ensuring that no genetically modified material remains in the soil after the trial has ended. As O’Neill comments, “The Sainsbury Lab propose monitoring the trial site for two years after harvesting the modified potatoes but anyone who has grown their own knows that potatoes can lie dormant in the soil for many years, popping up as a vigorous new plant just when you least expect it.”

Objections to the proposed trial can be lodged with Defra until Easter Monday, 22 April. Details can be found at www.gmfreeze.org/potato