Letter to Michael Gove on Agroforestry 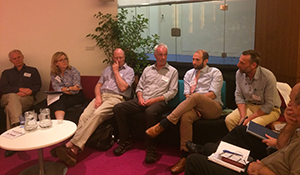 Farmer panel at the Agroforestry 2017 Conference

Some of the UK’s leading farming and forestry organisations, including ORC have put their names to a letter to Secretary of State Michael Gove, highlighting the benefits of agroforestry, the practice of cultivating trees and crops or livestock on the same area of land.

The current Rural Development Programme for England does not include options to support agroforestry, the result of a perceived lack of demand from farmers and landowners to adopt the practice. But in June this year, a major conference on agroforestry – organised by the Soil Association, the Woodland Trust and the Royal Forestry Society – brought together 250 farmers, foresters and researchers, with many more on a waiting list for the oversubscribed event.

The conference heard from farmers who are already investing in, and benefiting from, agroforestry schemes. While the opportunities were clear, it was evident that gaps in support and advice presented a significant obstacle that could be overcome by Government.

Tom MacMillan, Director of Innovation at the Soil Association, said: “We know that the new Secretary of State is looking for bold ideas to square the UK’s environmental and economic goals, and agroforestry is one of the exciting opportunities to do that in the agricultural sector. Our understanding of its potential for farm businesses, tackling climate change and supporting our soils is growing all the time and the early adopters already show inspiring examples of how to make it work. On a large scale this could be game-changing. But to exploit it fully, and to remove some of the barriers farmers have identified, requires strategic support from government.”

A well-managed agroforestry system can boost land productivity by up to 40% by making efficient use of natural resources. Trees also store carbon, improve water management and enrich biodiversity. By using trees alongside livestock you create natural shelter that improves livestock welfare. These are just some of the benefits explained in the letter to Secretary of State Michael Gove, signed by organisations that want to see agroforestry brought in to the mainstream.

Christopher Price, Director of Policy at the CLA, said: “As a sector farming needs to improve both its productivity and its environmental ambitions: agroforestry has the potential to deliver on both of these which is why CLA members are increasingly taking it up. However, if we are to see the full benefits of agroforestry we need the right regulatory and policy frameworks in place. Devising a post Brexit agricultural policy provides the opportunity to revisit these issues, improving the incentives and removing the obstacles.”