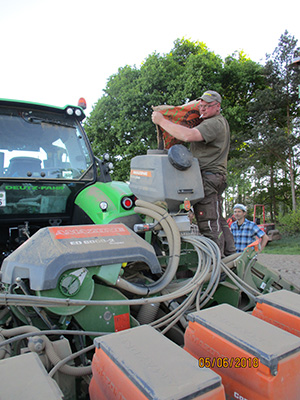 Filling mycorrhiza inoculum in the microspreader

Mycorrhiza fungi can be a useful bio stimulant for agriculture. It can contribute to better crop quality and a higher yield with less fertiliser, as the fungi can help plant roots to take up nutrients such as nitrogen, potassium and phosphate from a much larger volume of soil. This can also help prevent nutrients leaching into the groundwater. In Northern Germany, the Operational Group AMF AGRI investigated how Mycorrhiza can be applied in the field effectively and easily. The project found some answers leading to more interesting research questions.

The Institute for Plantculture (Institut für Pflanzenkultur) led the project. This institute works with farmers on knowledge development and exchange, while also managing its own farm. Dr. Carolin Schneider, who coordinated the project, says: “Our Operational Group aimed to support efficient and resource-saving nutrient management. We tested automated and targeted application of Mycorrhiza in the field to help crops to take up nutrients and grow. We also found that micro-spreaders are helpful in applying the Mycorrhiza, because they can spread the Mycorrhiza inoculum directly into the seed row. This inoculum is a very fine powder, which should be combined with carrier material for application in the field.”

“We wanted to test the use of the Mycorrhiza in a conventional and organic system, during two growing seasons. Two farmers cooperated with us to test the use of Mycorrhiza in their crops. Michael Cordts cultivates soya and corn on 155 ha of land on his organic farm. Bernd Trumann cultivates potatoes on his 350 ha in the conventional way. The Mycorrhiza was inoculated in granulate, suitable for micro-spreaders. The farmers did field preparation, seeding, maintenance and harvest. Their experience and knowledge on micro-spreaders proved very valuable in developing an effective application method for the Mycorrhiza.”

The project yielded some interesting insights. Schneider: The main result of this Operational Group was that the Mycorrhiza had positive effects on the yield and biomass of soybean and corn for organic farming. Unfortunately, it turned out that the potato farmer Trumann didn’t get great results with the Mycorrhiza. We don’t know exactly why, because without a detailed investigation, there can be many different reasons. At the end of the project, we concluded that we needed to do more tests to explore the reasons for the different results of Mycorrhiza treatments.”

“We also had some unanswered questions regarding the precise application of the Mycorrhiza with the micro-spreader. Therefore, we set up the Precision-AMF Operational Group project in February 2019 that will investigate the area-specific application of Mycorrhiza by a micro-spreader by using precision technology. In 2020 the institute also started the follow-up Operational Group project Bioseed. It investigates the effectiveness of coating seeds with Mycorrhiza. This could save farmers time, as it would mean that they would not need to spread the Mycorrhiza separately. Applying Mycorrhiza to crops may be a promising way for arable farmers to produce more with less, but there are still many practical questions to be answered”, concludes Dr.Schneider.