The OK-Net knowledge platform will be introduced to BIOFACH on 16th February in Germany. 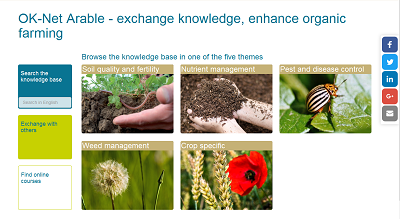 The knowledge platform was launched in October 2016. It was developed as part of the OK-Net Arable project to exchange organic knowledge and enhance farming. It provides a wide range of resources, and a virtual meeting place for cross-border learning.

The complexity of organic farming requires farmers to have a very high level of knowledge and skills but exchange of information on organic farming techniques remains limited. Therefore, the OK-Net Arable knowledge platform was developed. It is part of the OK-Net Arable project, which is coordinated by IFOAM EU and involves 17 partners from 12 countries throughout Europe. The project is financed by Horizon 2020, the EU’s main funding instrument for research and innovation. OK-Net Arable started in March 2015 and will run until February 2018. Farmers play a prominent role in all stages of the project, making OK-Net Arable very innovative among projects of its kind. Much more than being asked for advice, farmers engage in a process of co-creation throughout the project. This work is facilitated by 14 farmer innovation groups.

The workshop at Biofach will start from 4:00 PM where the speakers will present some experiences with farmer-led innovations.

We would like to encourage you to come and take part in this afternoon session at BIOFACH. More information here