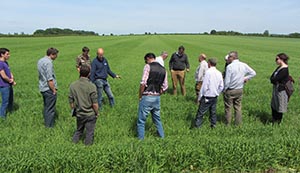 The complexity of organic farming requires farmers to have a very high level of knowledge and skills. But exchange on organic farming techniques remains limited. The OK-Net Arable project aims to facilitate co-creation of knowledge by farmers, farm advisers and scientists to increase productivity and quality in organic arable cropping all over Europe.

OK-Net Arable is coordinated by IFOAM EU and involves 17 partners from 13 countries all over Europe. The project is financed by Horizon 2020, the EU’s main funding instrument for research and innovation. OK-Net Arable is one of the first four so-called thematic networks funded under the umbrella of the European Innovation Partnership for Agricultural Productivity and Sustainability (EIP-AGRI). This EU policy instrument aims to foster innovation by connecting farmers and researchers.

OK-Net Arable takes a very innovative approach in that in all stages of the project, farmers play a prominent role. Much more than being asked for advice, farmers contribute to a process of co-creation of knowledge throughout the project.

Context of the project

The Organic Research Centre based at Elm Farm near Newbury is the UK’s leading independent research centre dedicated to the development of sustainable food systems based on organic/agro-ecological principles. Further information on our activities can be found at www.organicresearchcentre.com