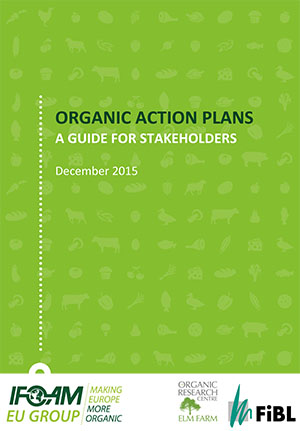 Over the last decade the development of Organic Action Plans (OAPs) has gained momentum as a mechanism for achieving a more integrated and balanced approach to organic policy-making in different European countries and at EU level. However the uptake, effectiveness and continuity of OAPs can vary significantly from country to country. For instance differing government priorities, the lack of ring-fenced public funding and the expectation that the organic sector should take the lead rather than government can impede the development of OAPs. This guide looks at the current status of OAPs in EU and EFTA countries with a special focus on plans at national and regional level and an in-depth analysis of six OAPs in the Czech Republic, Denmark, France, Germany, Andalusia (Spain) and Scotland (UK). It also takes into account the OAPs developed at EU level by the European Commission. The guide builds on the EU-funded ORGAP project which undertook a comprehensive comparative review of several national and regional OAPs and produced a Manual to support the development of OAPs and a toolbox for evaluation. To support the future OAP development and implementation this guide sets out recommendations for the organic sector and EU, national and regional policymakers.