Home / News / Will Brexit fix it or wreck it?

Will Brexit fix it or wreck it?

ORC Executive Director Prof. Nic Lampkin’s reflects on the EU referendum result in his editorial for the ORC Bulletin 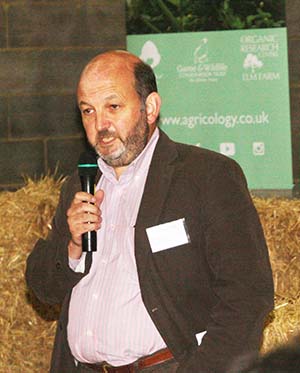 I write this with a heavy heart as the referendum results come in on Friday morning. The EU has been a central part of my life, both personally and professionally. It represents for me a unique attempt to build bridges between countries, breaking down barriers, with richer countries helping poorer countries to rebuild, ensuring peace through economic stability and interdependence. For me, the intolerance towards others less fortunate that has marked recent political debate, not only in the UK, rings alarm bells for future conflict.
But the result is what it is. I know there are some also in the organic community who will welcome it – the divisions in the country are also closer to home. The big question is what comes next? And what will it mean for the food, agricultural, health and environmental values that we cherish, for the development of organic farming in the UK, and for the work of the Organic Research Centre?

It’s impossible to provide a clear answer, given both the short-term political uncertainty following the referendum, as well as the lack of knowledge about the process we will now go through and the final outcome. There are some who argue that the departure of the UK from the EU will still not happen, because the political shake-up that will now come, and the pressures to reform and rescue the EU will be such that a solution will be found. But what if it doesn’t? Sadly, it looks like, realistically, there is no turning back.
Like it or not, the EU has had a big impact on the development of organic farming and the environmental sustainability of agriculture in Europe.

The EU has provided a regulatory framework supporting the development of the organic market since the early 1990s. We may not like the EU organic regulation, we may be frustrated by some of its provisions, but the market success of organic food has undoubtedly been underpinned by its legal status, and this needs to be maintained. Like many other non-EU countries trading with the EU, including Norway, Switzerland and Turkey, will the UK have any choice but to continue implementing the EU organic regulation so that our trade in organic products can continue?

The EU has provided a policy support framework for organic farming that has helped share the risks for farmers converting to and continuing in organic production, recognising the environmental and other benefits for society that organic farming delivers. Will this support continue in a UK policy context that is much less committed, to organic farming and to the environment, than other EU countries?

The EU has also provided a framework to support research and knowledge exchange for organic farming, enabling learning and sharing of ideas and innovations across borders that has helped improve the technical, environmental and financial performance of organic farms. Of course, Switzerland has proved that non-EU states can do even more in this respect, but how likely is it that the UK will follow the Swiss role model in this context?

The EU has supported active communication with consumers and citizens, including the Organic Trade Board-led promotional campaigns in recent years. With UK scepticism about the benefits of organic farming, benefits that are much more widely accepted elsewhere in Europe, how much poorer will UK popular awareness and understanding of the potential of organic and agroecological approaches be in future?
The UK failure to invest in organic and agroecological approaches has been a significant barrier to realising our full potential, contributing to the decline in organic land area and food sales over the last few years which leaves us now with little more organic land in the UK than we had 15 years ago. The contrast with other EU countries, including Denmark, Germany, France and Austria, that have invested much more strongly in organic farming in the same period, is very marked. Without the support frameworks that the EU has provided, how much worse will things be in the UK in future? Or will there be a renaissance following the political shake-up that will come?

The result of the referendum undoubtedly creates very real challenges for the Organic Research Centre, potentially impacting on our survival as an independent organisation given our reliance on European research funding. But even more critical now is that the organic community – and others sharing significant agroecological common ground with us – come together to ensure that the positive vision that we hold for agriculture, food, health and the environment survives the transition. We at Organic Research Centre will commit fully to supporting this process, working not only with our friends and allies in the UK, but also with our many partners elsewhere in Europe and across the world.

More about the ORC Bulletin and how to subscribe here