New Countryside Stewardship Scheme support rates for organic farming in England have been announced today. The Organic Research Centre, which played a significant role in securing a review by Defra of its original proposals, says the new rates represent a significant improvement on the originally proposed maintenance payment of £17/ha and come closer to the rates already announced in Wales and Scotland.

Defra’s announcement, which coincides with the Organic Research Centre’s Organic Producer’s Conference starting in Solihull tomorrow (Wednesday), comes after a lot of hard work behind the scenes. Defra has recognised the role that ORC staff Nic Lampkin and Mark Measures played in the process of developing the new support options.

Nic Lampkin, Director of the Organic Research Centre said: ‘The new rates announced today represent a significant improvement on the originally proposed maintenance payment of £17/ha and come closer to the rates already announced in Wales and Scotland. They also represent a better balance between support for the conversion period and maintenance, but farmers need to be realistic about the real costs of conversion and plan carefully as the payments only partly compensate for the costs.’

Organic farm income data analysed by Aberystwyth University and the Organic Research Centre over many years has shown that, with the help of premium markets and agri-environmental support of this type, organic farms once converted can perform as well as non-organic financially while delivering significant environmental benefits. With the market recovering, and improved support including automatic qualification for Greening, the organic option deserves a fresh look. The Organic Farm Management Handbook, published by the Organic Research Centre, provides detailed enterprise costings for organic crops and livestock that can be used to help evaluate the options.

The following Table and Charts provide relevant example data with further information in the editorial notes. 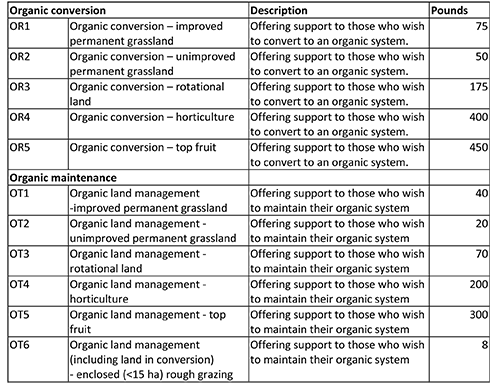