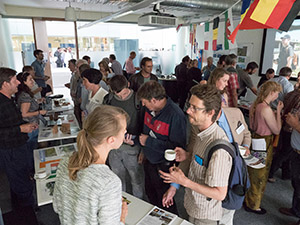 During one of the hottest weeks of the UK summer, our Agroforestry Innovation Networks (AFINET) partners visited a range of local agroforestry systems, including a traditional wood pasture (Hungerford Common), a mature silvopastoral alley cropping site (Bill Acworth at Little Hidden Farm), as well as the inspirational highly diverse organic vegetable system at Tolhurst Organic.

Some AFINET partners then attended Agroforestry 2017, the first large-scale UK Agroforestry conference, hosted by Cranfield University, and organised by the Woodland Trust and Soil Association. Attended by around 250 people, including over 130 farmers and foresters, the day featured many inspring presentations, as well as showcasing a range of farmers talking about their reasons for integrating trees into their farming systems. The conference wrapped up with surgery sessions, including one hosted by AFINET partners. Conference delegates were invited on an agroforestry tour of Europe, with the opportunity to sample agroforestry products from nine countries.

The agroforestry energy continued the following day with the Farm Woodland Forum annual meeting, hosted by Paul Burgess at Cranfield University. Morning presentations included an overview of agroforestry policy in the UK and Ireland, coordinated by European Agroforestry Federation (EURAF) vice-president Gerry Lawson, and a series of talks exploring different aspects of agroforestry in practice. In the afternoon the group visited the apple silvoarable system of Stephen and Lynn Briggs, on the fenland soils of Cambridgeshire.

All in all, an inspiring week, and one in which the momentum building in the agroforestry movement was tangible.