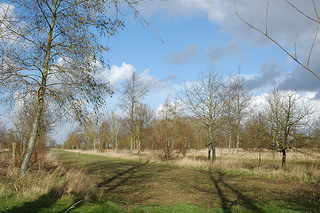 26 organisations call for Defra to back agroforestry

In a letter to Owen Paterson MP, the Secretary of State for Environment, Food and Rural Affairs, the Organic Research Centre joins with 22 other organisations and individuals to call for Defra to recognise the potential of agroforestry and to reverse its decision not to adopt measures to support agroforestry under the next English Rural Development Programme. Further organisations have added their support since the letter was sent.

The letter was written in response to the announcement in the House of Lords by Lord de Mauley on 21st January that, despite the potential benefits, Defra would not adopt Pillar 2 agroforestry measures as provided for under Article 23 of the new EU rural development regulation, or include an agroforestry option in the New Environmental Land Management Scheme.

Agroforestry is the practice of integrating the cultivation of trees, crops and/or livestock on the same agricultural area for greater productivity and biodiversity. The letter sets out the reasons for the call, which include substantial environmental benefits of agroforestry, including biodiversity, soil, water and flood protection, combined with improvements in agricultural productivity, as well as an under-estimation of its potential uptake by farmers and growers.

The case for agroforestry is reinforced by the call by leading flood management experts in an open letter to the Prime Minister published in the Daily Telegraph on 21st February that more trees should be part of the approach to reducing flood risks.

Prof. Nic Lampkin, ORC Director, says; “We feel that the time has come for agroforestry. Our research and that of many others has clearly demonstrated the potential benefits. By deliberately ignoring it, the government is missing a significant opportunity to deliver increased agricultural productivity, together with enhancement of environment and landscape.”

Read the letter in full here

Since the letter was sent, the following organisations have asked to be identified as supporters of the call:

Colin and Ruth Tudge, the Campaign for Real Farming and Funding Enlightened Agriculture