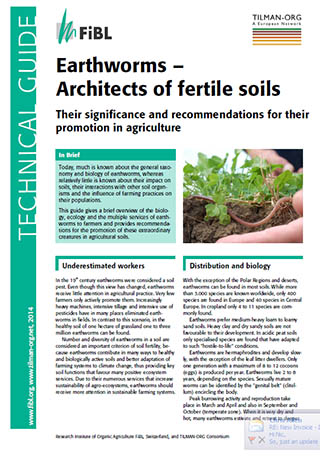 Earthworms play a key role in conserving soil fertility and are excellent indicators in agricultural soils. A new technical guide gives an overview of the multiple services of earthworms to farmers and provides recommendations for the promotion of these extraordinary creatures in agricultural soils, called also ecological engineers.

Number and diversity of earthworms in a soil are considered an important criterion of soil fertility, because earthworms contribute in many ways to healthy and biologically active soils and better adaptation of farming systems to climate change. But today increasingly heavy machines, intensive tillage and intensive use of pesticides have in many places nearly eliminated earthworms in fields.

Due to their numerous ecological services that increase sustainability of agro-ecosystems, earthworms should receive more attention in sustainable farming systems. There is a large body of information available about their impact on soils, their interactions with other soil organisms and the influence of farming practices on their populations. Based on new research findings various agricultural practices can be recommended to enhance earthworms, among them reduced tillage. These recommendations are described in detail in the new guide.

The guide was compiled as an output of the TILMAN-ORG-project “Reduced tillage and green manures for sustainable organic cropping systems”. The overall goals of this project are to design improved organic cropping systems with enhanced productivity and nutrient use efficiency, more efficient weed management and increased biodiversity, but lower carbon footprints. It is funded by the CORE Organic II Funding Bodies being partners of the FP7 ERA-Net, CORE Organic II. For more information on the project consult the project website www.tilman-org.net.