Home / News / Farming for nature pays off for organic Wimpole

Farming for nature pays off for organic Wimpole

Nature and soil health are flourishing at the National Trust’s organic Wimpole Home Farm near Cambridge according to the results of a full ‘health-check’ into its biodiversity, carbon levels and levels of public accessibility. 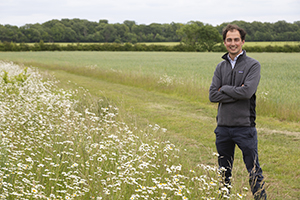 The results, announced as the landmark Agriculture Bill starts its next crucial stage in the House of Lords tomorrow, show increases in the numbers of breeding pairs of rare farmland birds, invertebrates and how the land is a significant sequester of carbon.

The organic farm has been focusing on nature friendly, sustainable farming methods for the past 12 years to reflect the conservation charity’s goals for farming models which are good for nature, deliver public benefit and which are profitable.

Nationally, numbers of farmland birds have declined by 54 per cent since 1970, the distribution of bees and hoverflies declined by 31 per cent between 2009 and 2014 and it is estimated that soil degradation in England and Wales costs the economy £1.2 billion a year.

The 589 hectare (1,419 acre) mixed livestock and arable farm, which is the only lowland farm run in-hand by the conservation charity, conducted in-depth surveys over two years into farmland birds, invertebrates and soil health.

As for public goods, in terms of access for the public, Wimpole also has over 40km of public rights of way and permissive paths which are enjoyed by over 350,000 visitors a year.

As a business, the farm is also returning a healthy profit

Last year, production levels across 369 hectares (912 acres) of the arable farm reached impressive levels for an organic farming system with last year’s harvests resulting in 142 tonnes of wheat – enough to make 200,000 loaves of bread, or over four million scones – 123 tonnes of organic barley – equivalent to what’s needed to make nearly 1.5million pints of beer and 126 tonnes of organic oats – equivalent to over 2.5 million bowls of porridge. For 2019, this resulted in £294,617 income, £117,588 profit for the farm (including subsidy payments).

Callum Weir farm manager at Wimpole said: “Many of the increases we recorded in the surveys are down to the combination of organic farming methods in the fields and the mosaic of margins, hedges and habitats that surround each field.

“That is not to say that organic farming is the only way to farm with nature. There are great examples of farmers across the UK who aren’t organic, but are still delivering massive benefits to the environment. Like many farmers, we dedicate areas of Wimpole to help biodiversity. For example, we sow a variety of plants including phacelia which has purpley blue flowers, clover and sainfoin, with its bright pink flowers which flower from early April right through to October. These attract and support pollinators and insects which have a vital role in the ecosystem.

“The survey results are vital to understanding how our holistic approach to farming at Wimpole is working. We want to farm sustainably at the same time as being a truly viable business and it’s fantastic to see how nature friendly farming and a profitable farm business, can go hand in hand.”

Professor Dave Goulson, invertebrate expert at Sussex University said: “The intensification of farming practises over the last 100 years, with the move to ever-larger fields, fewer crops, and lots of chemical inputs, has been a major driver of biodiversity loss. It is hugely heartening to see that farming doesn’t need to be this way; Wimpole shows that it is possible to have a highly productive, profitable farm without pesticides, and to simultaneously encourage biodiversity and capture carbon. The new Agriculture Bill could learn from this.”

Mark Harold, Director of Land and Nature at the National Trust said: “Sustainable, productive and profitable farming is underpinned by a healthy environment.

“Coronavirus has shown how important it is to have a resilient food and farming system. We know that climate change and sustainability pose the greatest threats to food security, as this year’s flooding and now drought have shown. The Agriculture Bill – and the principle of public money for public goods at its heart – is an opportunity to deliver this. At the Trust we are working to demonstrate that sustainable farming does work and that it is profitable. We have taken the risks, experimented and want to share our learnings with others. At Wimpole we’ve had to overcome particular challenges such as soil degradation, decreasing returns from farming and declines in farmland wildlife. With a focus on sustainable land management, wildlife and soil health can recover quicker than we might think.

“The story at Wimpole paints one of hope and optimism – and the Government’s forthcoming ‘environmental land management scheme’ will be crucial to replicating this across the farming industry, as will the new Agriculture Bill in prioritising government support for this scheme. Together, these two mechanisms will ensure all farms have a sustainable future which will be good for the environment, good for farm businesses and good for people. Tomorrow, the Agriculture Bill starts its next stage in the House of Lords. It’s vital that its ambition and key public goods principles aren’t weakened. We also mustn’t see progress at home on sustainability undermined by food imports that don’t meet our standards: the Bill should therefore be amended to provide safeguards against this.”

To fully understand the impact of 12 years of organic farming on the environment, the team carried out surveys into rare farmland birds, invertebrates and conducted an in-depth study into carbon sequestration.

Key findings from the farmland bird survey conducted across half the farm revealed that since 2013:

A total of 1,145 species were recorded in the invertebrates survey, equating to an increase of 38 per cent in the number of species between 2003 and 2019.

This included 95 rare species with formal conservation status including Bombus Ruderatus – the large garden bumblebee and Tyria Jacobaeae – the cinnabar moth. 75 species of bee, 49 species of wasps, 46 species of hoverflies and 22 types of butterflies were recorded. Other key results from last year included:

Callum continued: “We were so pleased by the results of the study. It was great to see that our margins, so rich in wildlife, bordering productive farmland. This gave me real hope that with the right support, farmers can help address biodiversity losses and play our part with tackling the climate crisis.”

The team used the Farm Carbon Cutting Toolkit, a recognised carbon measure by the farming industry, to conduct a full carbon analysis across the whole estate to include the farmland, parkland and woodland.

Thanks to the team’s holistic approach to farming on the estate, incorporating soil management, habitats and tree planting/woodland management, the land is a significant sequester of carbon, with a total carbon balance of -2,260 tonnes of CO2 per year.

Callum explains: “When you think that an economy class return flight from London to New York emits an estimated 0.67 tonnes of CO2 per passenger, this is really significant.”

Over the last 12 years, by far the biggest sequester of carbon is the increase in soil organic matter (SOM).

This has been achieved by applying agroecological principles to the arable farmland which includes reducing cultivation, cover cropping, integrating livestock, utilising habitats and stewardship and embracing technology.

“Trees were a significant sequester or carbon on the estate, however the main belts and blocks of woodlands on the estate are reaching maturity and will soon stop sequestering carbon (but these old trees remain very valuable to biodiversity). However, we’ve addressed this by planting 1,000 parkland trees over the past 10 years which will help with carbon capture and biodiversity.

“We recognise that our livestock are a large emitter of carbon. But, they are the perfect tool to manage our Grade 1 listed parkland and the traditional hay meadows.

“If we were to plough up the parkland and convert it to arable, this would release 50,000 tonnes of CO2e from this carbon sink – equivalent to 100,000 return flights to New York City (for individual people or 416 full 747 aeroplanes). This demonstrates the value of livestock in the carbon cycle, and the benefits of grass fed meat. If meat is produced in the right way and consumed in the right amounts, it can be sustainable.”

See also: Are organic options being side-lined by Defra?