Home / News / From Uniformity to Diversity

From Uniformity to Diversity 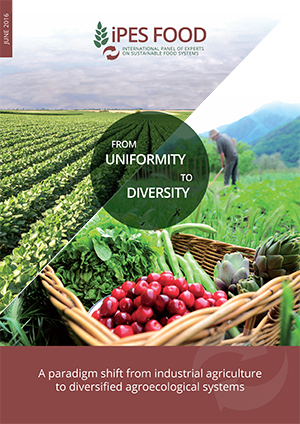 New report from The International Panel of Experts on Sustainable Food Systems (IPES-Food): ‘From Uniformity to Diversity: A paradigm shift from industrial agriculture to diversified agroecological systems’

Input-intensive crop monocultures and industrial-scale feedlots must be consigned to the past in order to put global food systems onto sustainable footing, according to the world’s foremost experts on food security, agro-ecosystems and nutrition. The solution is to diversify agriculture and reorient it around ecological practices, whether the starting point is highly-industrialized agriculture or subsistence farming in the world’s poorest countries, the experts argued.

The International Panel of Experts on Sustainable Food Systems (IPES-Food), led by Olivier De Schutter, former UN Special Rapporteur on the right to food, released its findings today in a report entitled ‘From Uniformity to Diversity: A paradigm shift from industrial agriculture to diversified agroecological systems’.

He added: “It is not a lack of evidence holding back the agroecological alternative. It is the mismatch between its huge potential to improve outcomes across food systems, and its much smaller potential to generate profits for agribusiness firms.”

The report reviews the latest evidence on the outcomes of the different production models, and identifies eight key reasons why industrial agriculture is locked in place despite its negative outcomes. It also maps out a series of steps to break these cycles and shift the centre of gravity in food systems.

Frison explained that some of the key obstacles to change are about who has the power to set the agenda. “The way we define food security and the way we measure success in food systems tend to reflect what industrial agriculture is designed to deliver – not what really matters in terms of building sustainable food systems,” Frison stated.

Based on a review of the latest evidence, the expert panel identified industrial agriculture as a key contributor to the most urgent problems in food systems:

A growing body of evidence shows that diversified agroecological systems deliver strong and stable yields by building healthy ecosystems where different plants and species interact in ways that improve soil fertility and water retention. They perform particularly well under environmental stress and deliver production increases in the places where additional food is most needed.

Diversified agroecological systems have also shown major potential to keep carbon in the ground, increase resource efficiency and restore degraded land, turning agriculture into one of the key solutions to climate change.

Some of the key findings:

The experts identified major promise in the burgeoning initiatives now forming around alternative food and farming systems, from new forms of political cooperation to the development of new market relationships that bypass conventional retail circuits. “The challenge is to join up these initiatives,” Frison urged. “Farmers can only be expected to transform their practices when they are certain that they will find markets. And consumers will only shift towards healthy, sustainable food when it is accessible and affordable to them. These changes must lock each other in, just as current dynamics conspire to lock them out.”

De Schutter added: “We must change the way we set political priorities. The steps towards diversified agroecological farming are steps to democratize decision-making and to rebalance power in food systems.”