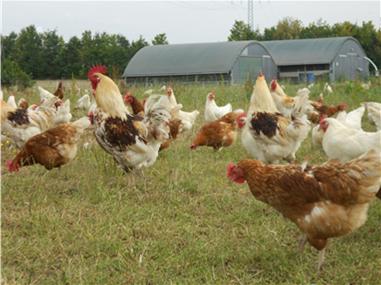 Over 180 participants from more than 40 countries gathered to discuss the current state of organic animal husbandry and its future challenges at the 2nd IFOAM Animal Husbandry Conference held in Hamburg, Germany from September 12 to 14, 2012.

The following news item, written by Brian Baker, FIBL, is sourced from www.organic-world.net with grateful acknowledgements. In the second part, ORC researchers Katharine Leach and Rebecca Nelder, who presented papers at the event, report on their impressions.

Gerold Rahmann of the vTI hosted the conference and provided a welcoming environment conducive to discussion. Keynote speakers included Fritz Schneider of the Bern University of Applied Sciences in Switzerland, Pierre Gerber of the Food and Agriculture Organization of the United Nations, and Alan Savory of the Savory Institute in the United States. The three presented very different visions for the future of animal production in the face of growing population pressure and environmental problems.
Participants in the scientific workshops confirmed and recognized animals to be an important part of organic agriculture throughout the world as source of food, draught-power, fertilizer, companionship and complement and supplement to crop. Vast areas are utilized by ruminants and make valuable food for human consumption. Papers and posters presented addressed many of the challenges that agriculture currently faces: food security and safety for an ever-increasing world population, biodiversity losses, climate change, depletion of non-renewable resources, and rural development. Organic animal production has the potential to mitigate many of the problems caused by conventional agriculture. However, participants were keenly aware of that the productivity of organic and extensive systems is a challenge that may limit organic agriculture’s effectiveness.

Facilitators of the various workshops presented the research priorities that emerged. Animal health, feed conversion efficiency, animal behavior and welfare, selection of appropriate breeds and overall sustainability of farming systems with mixed crop and animal production were all seen as promising avenues for future research. Two themes expressed throughout the conference were farmer engagement and the dissemination of research results. Specific recommendations will be published as a follow-up to the conference.

One outcome of the conference was the Hamburg Declaration, approved by acclamation of the participants. In it, the organic sector strongly committed to protect animal welfare and create conditions to promote animal health through improved husbandry practices. A harmonious relationship among soil, plants, animals and humans is a must for sustainable development. Participants found it is important to find ways to produce good quality animal products that are safe and in sufficient quantities to ensure good health of human beings and earn enough income for farmers in a competitive global economy. Animal health and welfare is a crucial issue for consumers that will require improvements while maintaining a profitable and sustainable farming system.

Scientists and other development professionals face multiple challenges to sustainable agricultural development. Animal breeding, feeding, housing, animal health, management and processing of animal products must be compatible with the principles and practices of organic systems, which pose challenges to practitioners of organic animal husbandry. We need more research, more knowledge and more extension efforts so that required inputs, methods are evolved for organic animal production.

The participants approved by acclamation the Hamburg Declaration of Organic Animal Husbandry, which:

The participants recognized that organic animal farming is still evolving and has a long way to go. Another outcome of the conference was to launch a the IFOAM Animal Husbandry Alliance (IAHA), which is an informal network of persons/groups interested in support, strengthen and stimulate the development of organic animal husbandry. It is an IFOAM Sector Platform that focuses on animal husbandry and it is a think tank within the IFOAM Action Group. IAHA allows IFOAM affiliates to integrate organic animal husbandry knowledge, concerns, positions, and issues into the work of IFOAM and the organic ovement.

The conference covered a wide range of topics, species, production environments and countries. A plenary paper by Alan Savory presented the hypothesis that droughts are frequently due to lack of effective rainfall due to soil conditions, rather than meteorological drought. He opposed the view that overgrazing has cause soil degradation, and proposed, with visual evidence, that an alternative system of grazing management was able to restore the water-retention properties of soil. Andre Leu considering climate change stressed the importance of including the carbon sequestration and methane breakdown capacity of grassland systems in balances.

In the Cows and climate session Anita Idel, author of “Cows are not climate killers”, linked back to the principles of Savory making the point that cows on “natural grassland” properly managed contribute far less to greenhouse gases than cattle ”fed by cropland” and argued that the way forward is to reduce the number of intensively fed cattle and focus on grass-based production.

Tree fodder/medicinal plants/alternative forages: With our involvement in agroforestry, we were interested to hear two examples of feeding willow to dairy goats. On the field visit to Trenthorst, we heard that feeding up to 10% of goats’ DM intake as willow did not incur any health problems. Willow was presented to goats by using a hedge trimmer to cut 2m length per day in situ from hedges at the edge of pasture, 2km hedge length per year being used. Goats browsed the leaves and sticks were collected once or twice a year for biofuel. Nik van Eekeren reported from the Netherlands that one farmer has cut willow into the grass and rolled it up with the grass when the grass was cut and made into big bale silage. Goats’ saliva enables them to make more of the willow than cattle, and means that conventional nutritional analysis is not necessarily relevant for goats .

Animal Health improvement: Almost all projects reported took the approach that farm-specific solutions to health problems are needed (Stable Schools for addressing metabolic disease in Germany, a pig project from Kassel, Germany, and cattle lameness reduction in the UK). Klocke et al presented data on complementary and alternative medicine as firstline therapy for clinical mastitis. Improvement in terms of clinical cure and reduced SCC was greater with antibiotic treatment but at least 79% of alternative treated cows could be re-integrated to herd without any antibiotic therapy. However, Sri Lankan treatments for mastitis – applications of coconut shell ash and aloe vera, or coconut milk and kollankola leaf oil, or ghee and honey – may be difficult to obtain in Europe.

Three posters and one paper with ORC authors were presented at this conference: