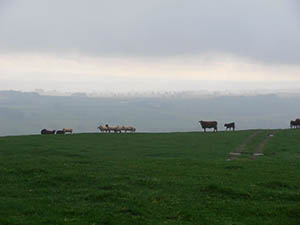 A study carried out over a 10-year period by ecologists at the universities of Hull and Aberdeen and the James Hutton Institute, has shown that grazing a mixture of sheep and cattle, at low intensity, is the best approach for maintaining biodiversity in the British uplands.

The British uplands are internationally important for their unique plant and bird communities. Species such as meadow pipits (a common upland songbird), field voles and red foxes live in a delicate balance that can easily be disrupted by changes in farming practices. Although it is known that livestock grazing has a significant impact on the variety of plants and animals that are found in grassland areas, the relationship is complicated, with different species affected in different ways.

For the first time, ecologists have conducted a long-term, landscape-scale experiment looking at the consequences of livestock management on multiple plant and animal groups that consume each other within an upland ‘food-web’. The aim of the research, which took place at the Glen Finglas estate in central Scotland, was not to determine a single approach to livestock grazing that would result in a ‘win-win’ situation for all species, but rather an approach that provided the best possible trade-off between ‘winners’ and losers’.

Dr Darren Evans, Senior Lecturer in Conservation Biology at the University of Hull, said: “It might be tempting to think that the most beneficial approach would be to stop grazing altogether in these upland areas, but actually that would be incredibly damaging in terms of conservation. These unique habitats have evolved as a result of traditional farming practices, and abandoning such areas would have a huge impact on the international important plants and animals that live there.”

Dr Evans, working with colleagues at the James Hutton Institute and the University of Aberdeen, established separate blocks of land that were each designed to mimic a range of livestock grazing scenarios. For ten years, between 2002 and 2012, measurements including plant diversity, insect abundance, meadow pipit territories and signs of vole and fox activity were recorded in each experimental plot.

“We found that grazing moderate numbers of sheep and cattle was particularly beneficial for the meadow pipits,” said Dr Evans. “This is probably because while there was still an abundance of vegetation to nest in, the grazers had also opened up some areas of grassland, therefore increasing the accessibility of insect prey.

“On the other hand, vole density was linked closely to vegetation, and so intensive grazing lead to a decrease in this species, which then appeared to have a knock-on effect on fox numbers. This demonstrates how a change in farming practice, such as increased grazing, can have an impact all the way up the food chain, from the vegetation, to the small mammals, to the predators.”

The research, published today (30 March) in Ecosphere, concluded that grazing a mixture of sheep and cattle, at low intensity, was the best trade-off between benefitting the meadow pipits, and disadvantaging the voles and foxes; therefore maintaining the balance of biodiversity.

Grazing both cattle and sheep, rather than sheep alone, is particularly important, as the different feeding habits of these two animals means that a whole range of different plants and plant parts are consumed. This prevents just a small number of plant species being grazed very hard, while others are allowed to grow freely.

“This study supports some of our other research that shows that mixed livestock grazing systems also improve livestock productivity and reduce methane emissions,” said Dr Evans.

“We must remember that global food demands, particularly for meat, are increasing all the time, but commercial grazing must be balanced with conservation in these sensitive ecosystems. Often we hear that we must eat less meat in the future if we are to meet the increasing global food demand. This is probably true, but here we show that livestock-farming is in itself an essential component of British biodiversity, and so certainly it’s important that we don’t abandon meat altogether.”

Read the paper in full here.