IFOAM EU urges the European Commission to take concrete, legal action to put an end to patents on seeds. 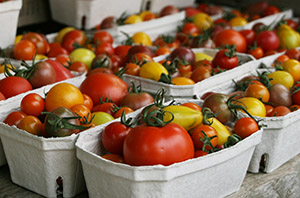 The Dutch Ministry of Agriculture has hosted a symposium on patents and plant breeders’ rights. This comes in the context of a new resolution by the European Parliament calling for a ban on the patenting of products obtained by conventional breeding techniques; a groundswell of opposition to a patent requested by Syngenta for a conventionally bred tomato; and recent revocation of a patent that had been issued by the European Patent Office for a conventionally bred melon from Monsanto.

Thomas Fertl, IFOAM EU Board Member and Farmers’ Representative, said: “The European Commission should urgently clarify that seeds and genetic traits that can be found in nature and obtained through conventional breeding cannot be patented. The patent legislation has increasingly been used to grant patents on natural traits, which is a complete misuse of the patent system. This kind of patents fosters further market concentration in the seed sector and hamper competition and innovation. Today, only 5 companies control 75% of the seeds sold throughout the world and own most of the patents. This is corporate control over farming and the food chain at its most dangerous.”

Maaike Raaijmakers project leader at the Dutch organic association Bionext, said: “We are cooperating with conventional farming associations, NGOs and many concerned citizens to put an end to patent claims on our food. Farmers constantly need new varieties, as growing conditions on the fields and market demands change rapidly. Climate change makes it even more urgent for farmers to have access to a wide range of adapted varieties. Patents on seeds hinder the development of new varieties, reduce choice and increase prices for farmers and consumers. This threatens our food security in the long term.”

Eric Gall, IFOAM EU Policy Manager concluded: “Patents on seeds hinder innovation in breeding and block the circulation of genetic resources. Access to genetic biodiversity is essential for creating new varieties and should not be blocked by patents. Organic and smallholder farmers are particularly at risk of losing the varieties they need to farm. The Commission must issue a legal interpretation that clearly prevents these types of patents, and should revise the biotech inventions Directive 98/44 in order to protect farmers from intellectual property rights claims regarding the plants and animals they save and breed.”