Home / News / Winner of the Soil farmer of the Year announced

Winner of the Soil farmer of the Year announced

Winner of the Soil farmer of the Year announced 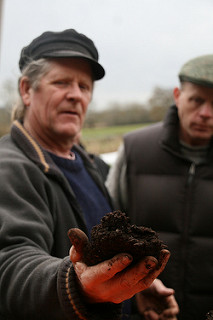 Clive Bailye, an arable farmer from Staffordshire has won the UK Soil Farmer of the Year, organised by Farm Carbon Cutting Toolkit (FCCT) and Innovation for Agriculture (IfA).

The inaugural competition aimed to find farmers and growers who were engaged with, and passionate about managing their soils in a way which supported productive agriculture, reduced greenhouse gas emissions and built soil organic matter and carbon.

Clive fought off stiff competition from a talented field of farmers and growers to take the top prize. The panel of judges which included scientists, industry experts, farmers and the project team were incredibly impressed not only by the standard of entries and the diversity of practices being trialled, but the resounding commitment of all entrants to soil management and continuous learning.

Clive Bailye runs a large scale arable combinable crops operation in Staffordshire, and has spent the last six years transforming the way that he farms to focus entirely on soil improvement. He has changed his cultivation strategy and his rotation which has resulted in the development of productive soils that are far less dependent on artificial inputs. This has also achieved financial savings for the business, making it more resilient against future risk and volatility.

David Gardener, IfA CEO explains, “Clive is a very worthy winner in a competition that included some of the country’s leading farmers. His comprehensive approach to managing soils susceptible to drought was most impressive and included a mix of cover crops, direct drilling, spring cropping and the re-introduction of livestock.”

Second prize was awarded to Iain Tolhurst, an organic grower from Oxfordshire. Iain impressed the judges with his impressive knowledge and understanding of how to maximise soil biodiversity and his innovative use of composts and green manures within his rotation as well as his agroforestry system. Whilst the business has been established over 40 years, it continues to innovate, push boundaries and educate others.

The accolade of third prize was taken by Jeremy and Heather Dale, dairy farmers from Shropshire. This herd which is run on a spring calving system, and is certified as 100% pasture fed is achieving fantastic grassland management through attention to detail and making the use of data. All data on grass growth and cow performance is logged and costs of production are scrutinised regularly. This is all possible, by ensuring that the soil conditions are right to grow quality grass that supports this production system.

Jonathan Smith, FCCT Director said “As this was the first time we’ve run the competition, we didn’t expect so many good entries. We appreciate the effort all entrants put in to this and hope to run the competition again later this year. These farmers and growers are demonstrating the benefits of building soil organic matter – healthier, more productive soils, increased carbon sequestration and better yields. It’s a win-win approach, and a message we would like to spread far and wide.”

The top three farmers will all receive prizes of fertility building or green manure seed from the sponsor Cotswold Seeds.

The top three farmers will also all be hosting farm walks, where their prizes will be presented and there will be a chance to see, understand and dig a bit deeper into what they are doing. The walk at Clive Bailye’s farm will be taking place on the 13th June, from 6 – 8.30pm, and at Iain Tolhurst’s on the 8th July. Further details are available on the FCCT website.

Another four farmers were shortlisted, Nigel Griffiths, David Miller, David Walston and David White who were felt to have shown exemplary soil management and were running innovative production systems.