Performance and Nutritional Properties of Einkorn, Emmer and Rivet Wheat in Response to Different Rotational Position and Soil Tillage 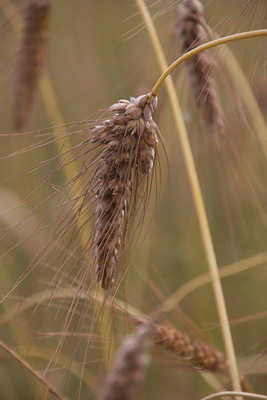 ORC’s Ambrogio Costanzo and Dominic Amos are co-authors of this open access paper (published in Sustainability) in cooperation of the University of Bologna, arising out of the DIVERSIFOOD project. This is one of the first studies of this type, with a dataset of agronomic, productive and nutritional properties of accessions of minor cereals tested in organic farming, different rotational positions and tillage systems in England.

Einkorn, emmer, and rivet are three species of wheat that have largely been neglected in modern agriculture. There is a revived interest in these species as potentially successful alternatives to mainstream wheat in organic and low-input cropping systems and as sources of highly nutritious food. However, the availability of literature studies concerning rotational positions and soil tillage management is still scarce. The aim of this study was to explore the field (cover, disease resistance, yield) and quality performance (protein, fats, fiber, polyphenols, flavonoids, and antioxidant activity) of these species when organically grown in the United Kingdom. As part of the H2020 DIVERSIFOOD project, different cultivars of each species, including landraces, populations, old varieties, and where available, commercial varieties, were included in the experiment. Rotational position and tillage systems significantly affected the main agronomic performance of the minor cereals investigated, suggesting that low fertility and shallow-non-inversion tillage might be suitable options to manage tall species. Emmer showed the highest incidence of foliar diseases, whereas einkorn and rivet wheat appeared quasi-immune to the main fungal diseases (stripe rust, septoria). In addition, nutritional and nutraceutical investigation showed that the rotational position and soil management also affect metabolic pathways differently by species and within species, by genotype. Our results suggest a good potential to introduce these species in sustainable cropping systems. Furthermore, the interesting species and cultivar-by-management interactions observed can pave the way for future, better focused, research on these underutilised and underexplored species.