The benefits of growing sainfoin 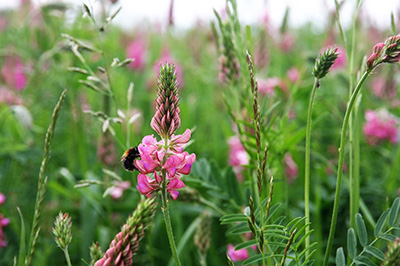 On Thursday, 31st May 2018, Cotswold Seeds and Reading University hosted a Sainfoin Experience Day in the village of Ascott under Wychwood, in the Cotswolds, UK. The morning was filled with talks from both scientists and farmers with topics ranging from the benefits of growing sainfoin (Onobrychis viciifolia) on animal nutrition, gastro-intestinal parasite control and soil fertility to experiences of growing different sainfoin accessions and varieties. The value of sainfoin flowers to the honey industry and the value of pollinators to the sainfoin seed industry (increasing seed production by 20%) was also covered.

A further topic under discussion was how best to feed sainfoin to animals. Sainfoin can be grazed and is highly palatable with one dairy farmer noting that voluntary intake was up to 30% higher than with grass. Sainfoin also makes a highly palatable hay but the drying process can cause leaf shatter and therefore a loss of the most nutritious component of the plant. Haylage or silage were therefore recommended for preserved feed. Since sainfoin contains high levels of protein, this is a useful alternative protein source and the tannins present in the sainfoin help to protect the protein during ensiling.

An alternative method is to dry and pellet the sainfoin for feeding to both ruminants and monogastrics. A farmer from the Burgundy region in France spoke of how she was doing just this with 500 hectares of sainfoin and reported high levels of satisfaction from feed companies and livestock farmers using their products at 5-15 % in mixed feeds. (Though not mentioned on the day, earlier research conducted in Austria, feeding sainfoin seeds to piglets, has shown that protein-rich sainfoin seeds compare well with soybean cake and peas in terms of feed intake, feed conversion and bodyweight gain).

The use of sainfoin as a protein-rich addition to animal feeds was a traditional practice that is being rediscovered. However, when growing sainfoin, both farmers and scientists noted that appropriate soil conditions and selecting the correct accession or variety are important to success. Well-drained, alkaline soils are key, so if soil is predominantly chalk sandstone, sainfoin should thrive. That said, the consensus was that even where there is a layer of clay, with an alkaline substrate, sainfoin should still grow well.