Impacts of conversion to 100% organic management

Although organic farming has the potential to produce food in an environmentally benign manner, the potential food-security impacts that could follow a 100% conversion are still unclear. This research provides a robust estimate of production and land-use that could occur under a range of organic management scenarios in England and Wales. Some results from the model-based analysis are outlined below. 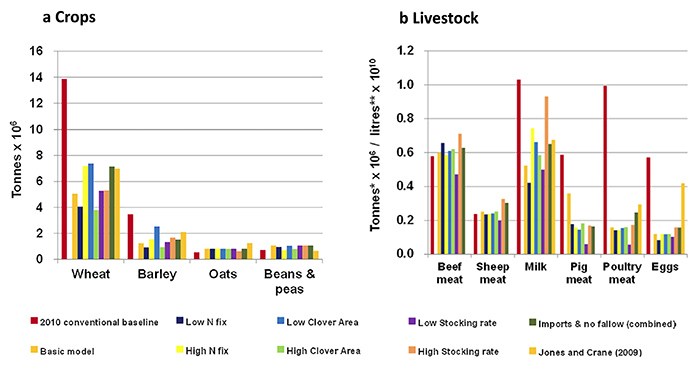 Output of (a) crops and (b) livestock products from agriculture in England and Wales under 100% organic management. A range of scenarios were explored and compared to a 2010 conventional baseline and to the estimates from a previous study by Jones and Crane (2009). *=meat and eggs **=milk.

Crop production volumes were generally lower than the conventional baseline under all organic scenarios, in particular for wheat and barley although minor cereal production (e.g. oats, rye) increased. For livestock beef and sheep outputs usually increased while monogastric livestock numbers fell sharply. Milk outputs were approximately two-thirds of the conventional baseline. The greatest variation across the scenarios was seen for the low and high nitrogen fixation rates. Reducing the area of fertility-building ley within organic crop rotations increased the outputs for cereals and reduced the production of crops with high-N offtake (e.g. sugar-beet). The production volumes generated under these scenarios are considerably lower than the previous estimate by Jones and Crane (2009).

Overall food-energy outputs as Metabolisable Energy (ME) fell to between 35% and 64% of the 2010 non-organic baseline, depending on scenario. Even if food waste were reduced the switch to organic methods would therefore result in a substantial decrease in domestic food production, requiring an increase in imports. Whether overseas land would be available for such an increase is questionable and a fundamental change in diets and/or farming systems would be required to avoid significant supply shortfalls for key commodities.

Detailed results and a description of the land-use model can be accessed in the full open-access paper here or at: https://www.sciencedirect.com/science/article/pii/S0264837717309882