The global organic market is growing 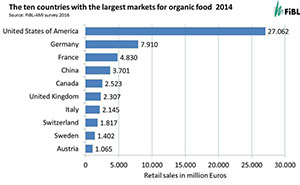 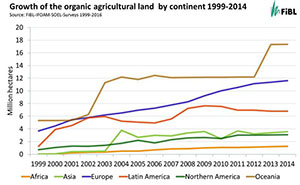 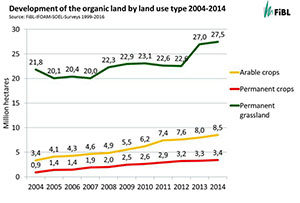 The positive global trend seen in the last few years continues: Consumer demand is increasing, reflected in the significant market growth of 11% in the US, the world’s largest organic market. More farmers cultivate organically, more land is certified organic, and 172 countries report organic farming activities (up from 170) as shown in the 2016 edition of the study The World of Organic Agriculture (data per end of 2014), published by FiBL and IFOAM – Organics International.

The market research company Organic Monitor estimates the global market for organic food in 2014 to have reached 80 billion US Dollars (more than 60 billion Euros). The United States is the leading market with 27.1 billion Euros, followed by Germany (7.9 billion Euros), France (4.8 billion Euros), and China (3.7 billion Euros). In 2014, the Swedish organic market experienced an unprecedented growth, increasing by more than 40 percent – a remarkable rate for an already well-established market. The highest per capita spending was in Switzerland (221 Euros) and Luxembourg (164 Euros).

More than 10% of farmland is organic in 11 countries