The organic retail market in Wales 2015 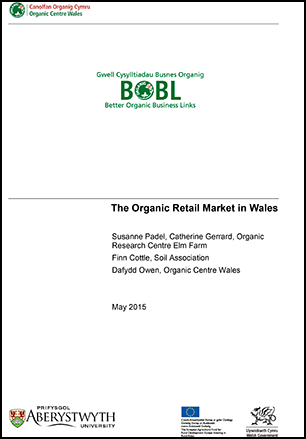 The Organic Research Centre was involved in a project with Organic Centre Wales to provide data on the organic retail market in Wales/West. Providing market intelligence for the organic sector in Wales has been a major focus of the BOBL (better organic business links) project but data on retail sales had not been covered in detail and ORC co-wrote a report that attempts to fill that gap in market intelligence. The report combines data from three sources: Nielsen Scantrack which covers sales through major food and drink retailers (supermarkets) in Wales/West, surveys of Welsh organic businesses (independent retailers, processors, box schemes, farm shops and others) carried out by the Soil Association and data from the Welsh producer survey carried out by Organic Centre Wales. In addition, comments were invited from a number of industry experts. The report estimates that the Wales/West organic retail market is worth £100m to £140m and finds that dairy, produce (fruit and vegetables) and meat are key sectors. The full report can be found here