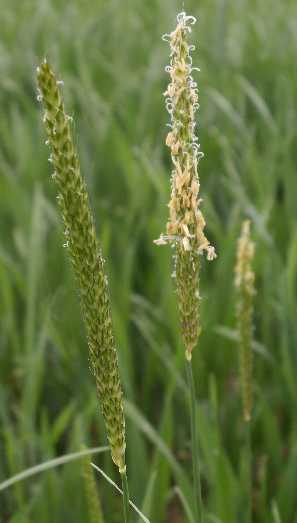 The project was one of three innovative new research projects to support sustainable agriculture, announced today by the Soil Association and funded through the Duchy Originals Future Farming Programme.The three projects, which have been devised to address important issues facing farmers practically and innovatively, have been awarded almost £50,000 between them, as part of the Duchy Originals Future Farming Programme. The results will potentially reduce farmers’ costs and improve productivity and animal welfare – but could also provide great benefits in marketing healthier products to an increasingly aware and demanding consumer. These research topics were suggested by farmers, working alongside scientists. The projects tackle three key challenges for organic and low-input agriculture: managing weeds without herbicides; finding affordable protein feed for poultry, pig and fish farming; and growing even healthier food

Black-grass is a particularly difficult to control weed that affects many farms across Britain – and is the source of much frustration for organic and conventional farmers alike! Led by innovative farmer John Pawsey at Shimpling Park Farm in Suffolk and the Organic Research Centre, this project will look at how grazing winter wheat with sheep can help control the black-grass. The project helps to tackle the broader challenge of managing weeds without herbicide – one of the themes of the Duchy Originals Future Farming Programme.

Nick Fradgley, Crops Research Assistant at the Organic Research Centre said: “I think that the funding for the trials will be a great opportunity to re-evaluate a traditional practice that may still be relevant as an integrated approach to weed management. There’s a lot of very useful anecdotal evidence out there and farmers’ experiences of traditional practices which are seldom tested, so it will be really interesting to see if we can quantify exactly what’s going on in an experimental trial.”

John Pawsey, Shimpling Park Farm said: “Black-grass is increasingly a problem for organic and non-organic farmers alike and with this trial we hope to see how a traditional practice might help us deal with a weed problem in an organic rotation which is pushed to deliver more autumn cropping. While we have experimented with grazing winter crops in the past, this trial will hopefully put in some rigorous replications to help us discover the benefits, be it from weed suppression, disease control or increased yield. Hopefully it will be all three!”

More on the project page here

‘Increasing insect consumption by laying hens in free range systems to reduce feed costs, enhance food quality and improve welfare’.Every farmer wants to find ways to reduce input costs – and this research project will potentially not only lower feed cost, but also be better for the hens and improve the nutritional qualities of the eggs. All through something as simple as increasing insect consumption in laying hens. Led by Stonegate at their Sutton Estates farm in Newbury and researchers from the University of Bristol, the project helps to find new ways of delivering ‘affordable protein feed for poultry’ and ‘grow even healthier food’. And if the results are positive, in the future it may even be able to make a big difference to the welfare of the thousands of hens who live in back yards and gardens.

‘Enhancing iodine and other trace element content of organic milk.’ Studies have consistently shown that organic milk is nutritionally superior in many components, and it’s important to organic farmers as the starting point for many consumers into buying organic food. But despite this, organic milk contains less iodine than conventionally produced milk. Newton Farm and Acorn Dairy have teamed up with researchers from Newcastle University to try to increase the levels of trace elements, including iodine, in organic milk.

The team will be treating their grazing land with iodine-rich products, such as calcified seaweed and also supplementing cows’ diets with organic iodine. Important for consumers, this study tackles the research theme of ‘growing even healthier food’.

Speaking about the projects, Tom MacMillan, Soil Association director of innovation commented; “We had a fantastic set of applications for some really innovative and interesting projects and it was inspiring to see so much enthusiasm from farmers and scientists alike. We’re confident that we’ve picked three projects that not only will provide real tangible benefits to farmers but will also support innovation in farming, led by farmers – something which is at the heart of the Duchy Originals Future Farming Programme.

“The Duchy Originals Future Farming Programme is all about putting farmers and growers in the driving seat so they can work together to devise practical solutions to the issues affecting them every day.”

Research is more crucial than ever to agriculture as the industry strives to farm sustainably in the face of climate change and increasing pressure on natural resources. To help, research must be practical and relevant for farmers. It needs to tackle the real problems faced by farmers as they grapple with improving their productivity while protecting the environment.

The Duchy Originals Future Farming Programme is funded by the Prince of Wales’s Charitable Foundation and helps farmers work with each other and with researchers to produce healthier food in ways that are better for the environment and farm animals. In addition to the research fund the programme runs ‘field labs’, which bring a small group of likeminded farmers together to solve a problem, adapting an approach pioneered in developing countries that supports practical DIY research by farmers. So far 450 farmers have taken part in field labs and there are 30 more planned for 2014.