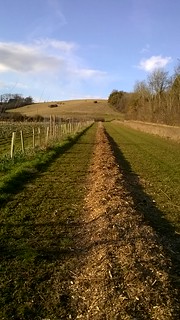 This one day workshop explored and demonstrated some of the many practical uses of woodchip in organic horticultural systems. Iain Tolhurst (Tolly) has been finding innovative uses for wonderful woodchip for many years and as such was a great host for a day learning about woodchip.
The day started with Anja Vieweger and Sally Westaway from the Organic Research Centre summarising results from some of the trials past and present at Tolhurst Organic using woodchip. Anja presented results from the woodchip compost field lab series, a full report can be read here, Sally introduced some new trials conducted as part of an EIP Operational group looking at using green woodchip (ramial woodchip) as a soil improver. See presentation here. We then headed out to the walled garden to hear about the use of woodchip as mulch in protected growing areas and to learn how the woodchip potting compost was made. The use of composting woodchip to provide heat for propagation was also discussed. Before lunch, two parallel workshops explored how best to source material on farm, from existing hedges and trees, as well as the impact of using on farm woody resources on whole farm sustainability. After a hearty organic lunch, the group then headed down to the field to see the composting site in action and also to have a look at the ramial woodchip trial and the hedges that provided the material. We finished the day by having a brief tour and discussion of the newly planted agroforestry system (mulched with woodchip!) and which will eventually produce more woodchip amongst other things.

Also see: Article by Ben Raskin, WOOFS operational group member, on the use of woodchip for soil health – including a link to the long term study in New York State.