A small part of the extensive bean collection at CIAT.

Late last year I was selected to showcase research conducted during my PhD and at my time at ORC as part of the British Council’s Researcher Links Initiative. The ultimate objective of this initiative is to establish long-standing, sustainable research links between the United Kingdom and Colombia, and to develop collaborative projects amenable to further funding opportunities. The workshop was held in March 2014 in Cali, Colombia. The city is nestled within a huge valley and is surrounded by vast hectares of sugarcane plantations. These plantations and processing plants are responsible for 95% of Colombia’s sugar and biofuel production, industries made possible by its tropical location and highly fertile soils. 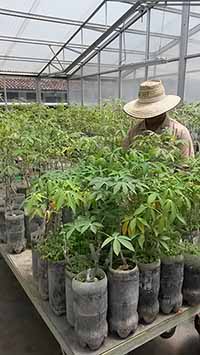 The ever resourceful Colombian scientists
using old Coke bottles as plant pots
in their cassava nurseries.

The workshop itself, which was covered by local media, was attended by academics, researchers and representatives of the British Council in Colombia with a range of backgrounds, including ecological, conventional and GMO. Presentations and discussions were of an extremely high standard and included topics such as plant drought tolerance in hardwood trees, valorisation of agricultural waste by biotechnology, and breeding to protect potato tuberisation from environmental stress. I contributed with a presentation on the science underpinning the COBRA project (Coordinating Organic plant BReeding Activities for diversity), a 3 year CORE organic II project involving 43 partners from 18 European countries. In addition to coordinating this project, ORC are conducting field trials with wheat to investigate the effects of natural and artificial selection on local adaptation and crop resilience. My talk focused on the ecological mechanisms that lead to increased yield stability in cereal varietal mixtures and composite cross populations. The agroecological approach to achieve reliable crop yields stimulated interesting discussions on the future of farming in both Europe and South America, and on the variety of methods available to help farmers cope with the present challenges facing modern farming and food security.

The agricultural researchers in the group had the opportunity to visit the nearby CGIAR centre, CIAT (International Centre for Tropical Agriculture). Located a few miles outside the city, CIAT houses approximately 800 scientists from all over the world and has over 500 hectares of field trials. We spoke with scientists working on a range of projects from small scale bioethanol distilleries for cassava to participatory plant breeding in rice. Finally we visited the genetic resources department where the international forage legume and bean collections are held. The collections require a considerable amount of work to uphold and maintain as the stocks require constant verification. Overall I found this workshop extremely valuable as an early career researcher. Being given the opportunity to discuss ORCs research with people from different scientific backgrounds really helps to frame the important questions properly and view them from new perspectives. I would like to thank the British Council for fully funding this workshop and the University of Nottingham (especially Stephan Heeb) for their excellent organisation.