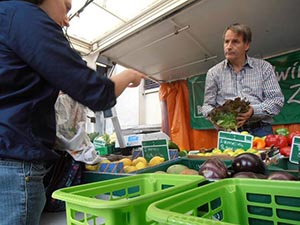 In 2013, the European organic market grew by approximately six percent to a value of more than 24 billion euros. Consumers in the European Union spent 22.2 billion euros on organic food. This is shown by the latest data provided by the OrganicDataNetwork, the Research Institute of Organic Agriculture (FiBL), and the Agricultural Market Information Company (AMI). Some countries, such as Switzerland, Sweden, and Norway, showed double-digit growth rates.

The countries with the highest per capita consumption were Switzerland; with more than 200 euros in 2013, followed by Denmark, Luxembourg, Liechtenstein, Austria, Sweden, and Germany. Switzerland is still the leader when adjusted to the purchasing power, followed by Luxembourg, Denmark, and Austria. EU inhabitants spent an average of 44 euros on organic food in 2013. In a global context, the shares of the total food market were highest in Europe and in the United States. The highest European shares were reached in Denmark (8 %), Switzerland (6.9 %) and Austria (6.5 %).

Data collection on organic agriculture in Europe was carried out by the Research Institute of Organic Agriculture (FiBL) and the Agricultural Market Information Company (AMI) in collaboration with the partners of the OrganicDataNetwork project and further experts.

The project “Data network for better European organic market information” (OrganicDataNetwork) aimed to increase the transparency of the European organic food market through better availability of market intelligence about the sector to meet the needs of policy makers and actors involved in organic markets The project has received funding from the European Union’s Seventh Framework Programme for Research, Technological Development and Demonstration under grant agreement no 289376. The views expressed in this press release do not necessarily reflect the views of the European Commission, nor do they in any way anticipate the Commission’s future policy in this area.