Figures from The Soil Association’s Organic Market report show this is significant growth in a year when both food prices and food spending fell. Shoppers spent an extra £1.4 million a week on organic products and the organic market exceeded £1.86 billion, despite a 1.9% drop in food prices and a 1.1% drop in sales of food and drink overall. Growth in sales across Soil Association Certification symbol holders increased by 7.7%.

Dairy products and fresh fruit and vegetables continue to be the most popular organic purchases. Overall, the strongest market growth was through online shopping and box schemes (11.7%) and larger independent retailers (5.7%) which offer the choice and convenience of extensive organic ranges in one place. More than a quarter of spending on organic products (27.9%) is in the dairy aisles with yoghurt sales increasing by 13.8% and dairy sales increasing by 6.5% -a stark contrast to the 3% contraction of the non-organic dairy market.

Sales of organic eggs and poultry were up 15.8% and 8.2%, while non-organic sales dipped by 6.2% and 3.3% respectively. There were also sharp increases for a wide range of other products against a background of sliding non-organic sales including fresh fruit (up 6.4%), tea (up 13.7%), cereals (up 4.2%) and biscuits (up 7.2%). While sales of organic vegetables fell by 2%, but in a context in which non-organic sales plummeted at five times this rate. There was also growth in catering (13.6%), health and beauty (20%) and textile (3.4%) sectors. 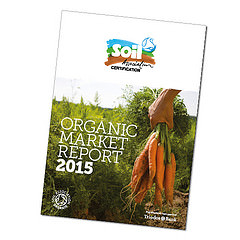 However, despite the continued demand from UK consumers, figures from Defra show the area of land under organic management decreased in 20141. In June 2014 the UK’s organic land area was reported to be 575,349 ha amounting to 3.3% of the agricultural land area being managed organically, with 4% of this in conversion and the rest fully organic. The area of in-conversion land fell by 24% and fully organic land by 3.9% in 2013.

2014 also saw new research highlighting the higher profitability of farming organically, and higher-than-expected yield potential. According to data from the government-funded Farm Business Survey, analysed by the Organic Research Centre and the Soil Association, the financial performance of organic farms outstripped that of comparable non-organic farms in the seven years from 2006 to 2013. The analysis reveals an average annual advantage in this period of £26-82/ha for organic farmers over their non-organic counterparts. Recent EBLEX Stocktake figures for sheep production also show organic lowland flock performance to have been £3-11/ewe better than for non-organic flocks in 2013-14. Meanwhile, a comprehensive meta-analysis of 115 studies carried out by the University of California at Berkeley found a smaller difference between organic and non-organic yields than in previous estimates.

Liz Bowles, head of farming at the Soil Association, said; “These are positive times for the organic sector and we have good reason to believe current levels of market growth will be sustained in the long term. This is thanks to a combination of committed consumers who understand the benefits of organic farming for themselves and the environment, new CAP support for farmers, new research and product innovation, and favourable economic conditions. We are seeing once again that rewards are there for those that stick with organic, make great products and sell them well. The UK organic market is expected to grow steadily again in 2015 and should break the £2 billion barrier in 2016.

“The reduction in land in conversion reflects years of uncertainty over the outcome of CAP reform. But the prospect of more generous than expected CAP payments from January 2016 in England, Scotland and Wales – coupled with a second consecutive year of market growth now confirmed – should encourage an expansion of organic production. But there are challenges at both ends of the supply chain. Increasing supply to meet increasing consumer demand without sucking in exports is key, but I am confident this can be achieved so long as major retailers and manufacturers send the market signals needed to build the confidence of farmers and growers.”

With nearly one third (29%) of shoppers seeking out ethically sourced and environmentally friendly products and over two thirds (68%)making the choice to support local farmers and businesses, the organic sector allows consumers to make more sustainable choices, with over 83% of UK households having purchased organic products in 20142. Feedback from retailers indicates that shoppers are becoming more health conscious and organic products offer answers to questions about food quality and provenance3. Nutritional credentials of organic received a significant boost in July 2014 when extensive research showed organic crops and crop-based foods (including fruit, vegetables and cereals) are up to 60% higher in a number of key antioxidants compared to non-organic.

Innovation is helping drive growth with the organic sector investing strongly in marketing and new product development. 2014 saw more organic versions of established brands, organic recipe boxes for busy shoppers and wholesalers selling direct via mainstream online shopping outlets. The mood in business is confident with 63% of leading businesses predicting growth in 2015 and six out of ten of these (62%) anticipating double-digit growth.