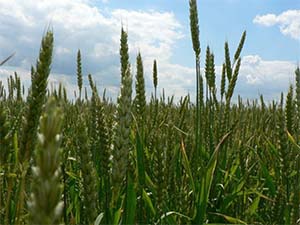 Next year we will be marketing our wheat population for the first time. We need your help to name it!

Climate change and unpredictable performance of cereal crops in organic and low-input farming is of increasing concern. This is aggravated by almost universal use of monocultural pureline varieties. We need a new genetic approach which is dynamic in providing crops that are able to adapt to variable environmental stress.

Consequently, we have developed an evolutionary breeding programme to produce a hugely diverse population of wheat suited to organic and low-input farming systems. It was bred by making 190 crosses among 20 different parent varieties and mixing all the resulting seed. This has now been through eleven generations of natural field selection, mostly at Wakelyns Agroforestry in Suffolk.

Increased genetic diversity makes more efficient use of soil nutrients and water, lowers plant disease and pest levels and thus improves yield stability of wheat. Moreover, our choice of parents has produced a population which combines attractive levels of both yield AND quality.

Unfortunately, it has been illegal to market such populations because they do not conform to international law which currently ensures monocultural uniformity. From trials completed over the last decade we have been able to convince EU officials that the benefits of the population approach should be evaluated through test marketing at the European level. 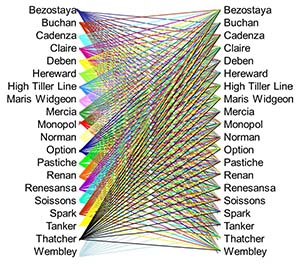 As a result, in March 2014 the EU law was changed to allow a trial period for marketing ‘varieties’ (populations) that do not fit the normal rules and regulations. Our seed crop is now in the ground and will be commercially available from 2015, but we need an official name. Can you help us?

The name needs to be “……………Population” and we want it to reflect its properties of diversity, adaptability, stability, robustness, resilience etc.