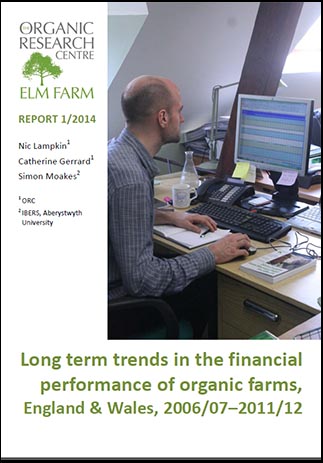 Long term trends in the financial performance of organic farms in England and Wales, 2006/07-2011/12

This overview report brings together the data for the six years from 2006/07-2011/12 to see how the performance of organic farms has really been affected by the economic downturn. It shows that for most farm types, the profitability of organic farms has held up much better than might have been expected from the retail market trend data. The overviews also show that for most farm types, the performance of organic farms remains comparable with that of similar conventional farms. However, certain farm types such as horticulture have fared much worse than others.

The report is based on the analysis of farms included in the Farm Business Survey in England and Wales that have more than 70% certified land. The results are presented by farm type groups according to the dominant enterprise in each case, calculated on the basis of standard gross margins. They are also compared with similar conventional farms selected on the basis of resource endowment (land area, location etc.), i.e. factors that are not influenced directly by the choice of organic or conventional management.

Read Soil Association report Organic farming: how it stacks up