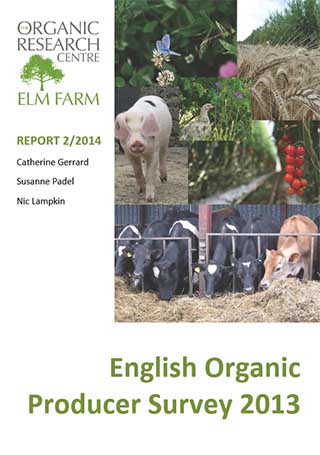 Thanks to funding from the OrganicDataNetwork project, the ORC carried out a survey of English organic producers asking about future intentions, current levels of prices and sales routes. The survey covers beef, sheep, pig, poultry (broilers and layers), dairy, arable, and horticultural production. There are approximately 2724 English organic producers and 223 of these participated in the survey, a response rate of just over 8%. The majority of the organic farmers surveyed indicated that they plan to remain in organic farming in the medium to long term and 40% indicated that they plan to remain in organic farming for over 10 years suggesting that they are very committed to organic farming. They indicated that they farm in this way for their livestock and for the environment, but profitability may not be sufficient to cover rising costs and allow re‐investment in their business. However, many commented that they would still farm in a low‐input or environmentally friendly manner if they were not organic. Some producers also expressed a desire for more market information and greater market transparency and it is hoped that the survey and this report represent a first step towards this.

Compare the results of the English organic producer survey with those of the surveys carried out in Wales by Aberystwyth University and Scotland by SRUC.