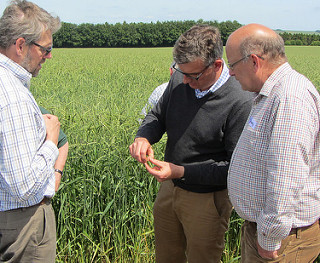 ORC organised the first UK farmer innovation group meeting for the Organic Knowledge Network Arable project, with support from OF&G and Organic Arable. The meeting on 18 June 2015 was hosted by Richard Gantlett at Yatesbury House Farm. Organic arable farmers from across the country were invited to attend. Discussions were organised around a series of participatory exercises, beginning with identification of challenges facing organic arable cropping in the UK. Perhaps unsurprisingly, weeds and soil fertility came top of the list. Group members identified potential solutions during a brainstorming session, solutions including suggestions for online and offline techniques for knowledge exchange. The meeting concluded with an inspiring farm walk where Richard shared his experiences with minimum-tillage techniques. The group will meet again later this year. Organic arable farmers who are interested in participating are invited to contact Beth Cullen at ORC.

This project has received funding from the European Union’s Horizon 2020 research and innovation programme under grant agreement No. 652654. This communication only reflects the author’s view. The Research Executive Agency is not responsible for any use that may be made of the information provided.