Organic farm incomes up in 2015 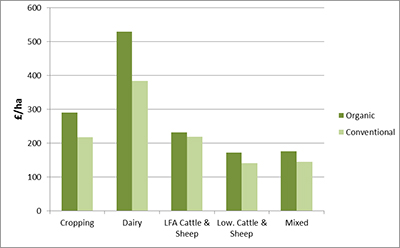 This detailed financial report on organic farming in England and Wales for 2014/15, undertaken by the Organic Research Centre for the Welsh Government, highlights that the organic dairy industry is now generating higher profits than conventional farms despite producing lower yields. The sector is also successfully competing for new export business in countries like China and USA.

These results indicate that organic dairy farm income was above conventional levels in 2014/15. Although yields are lower, reduced input costs on items such as fertiliser and machinery together with receiving a premium price for organic milk means that the organic sector has become more resilient in a challenging market.

Professor Nic Lampkin from the Organic Research Centre in Newbury and one of the co-authors of the report explains, “There has been a considerable recovery in the organic market since the start of the recession. In the last couple of years the organic movement has witnessed growth in many areas and this is evidenced in an increasing demand for organic products from consumers as well as a rise in the range of organic products which are now more widely available.

According to The Soil Association’s 2016 Market Report, the organic market continued to experience steady growth of 4.9% in 2015. This is the third year of consecutive growth for the UK organic sector, now worth £1.95 billion. Sales of organic products have continued to outperform the non-organic grocery market which decreased by 0.9% in the same period.

Animal welfare has also been a key motivator to consumers who are increasingly choosing organic products because they want to know the origins of their food, and are willing to pay more for products with quality assurance standards. Organic farming is perceived as being better for the environment and wildlife as well as providing a better quality of life for farmed animals.

Nic Lampkin said that the report also showed that the organic sector was more likely to benefit from support payments through Government Agri-Environment schemes, not only the support for organic production. He said, “Organic farms are far more engaged in production methods that are better for the environment. Restricted pesticide inputs, and more diverse crop rotations contribute to greater diversity and to natural weed, pest and disease control. These are all seen as important reasons for the financial support given to the organic sector.”

This annual report, produced by the Organic Research Centre, a partner in Organic Centre Wales, is now funded by the Welsh Government. Nic Lampkin says, “We have been monitoring the performance and profitability of the organic sector in England and Wales for the past 20 years and even in difficult market conditions, the organic sector has managed to maintain its position. However, although numbers fell during the recession, organic farming in England and Wales has stabilised, with fewer farmers withdrawing from the sector and new converters coming on board.

The Organic Research Centre (ORC), established in 1980, is the UK’s leading independent research centre for the development of organic/agroecological food production and land management solutions to key global issues including climate change, soil and biodiversity conservation, and food security.