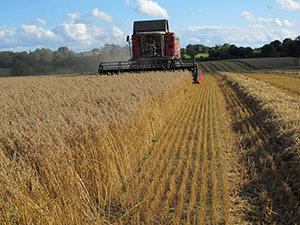 OK-NET Arable aims to improve the exchange of innovative and traditional knowledge among farmers, farm advisers and scientists to increase productivity and quality in organic arable cropping all over Europe, in order to satisfy future market demand.

The complexity of organic farming requires farmers to have a very high level of knowledge and skills. But exchange on organic farming techniques remains limited. The OK-Net Arable project aims to facilitate co-creation of knowledge by farmers, farm advisers and scientists to increase productivity and quality in organic arable cropping all over Europe.

OK-Net Arable is coordinated by IFOAM EU and involves 17 partners from 13 countries all over Europe. The Organic Research Centre is the UK research partner. The project is financed by Horizon 2020, the EU’s main funding instrument for research and innovation. OK-Net Arable is one of the first four so-called thematic networks funded under the umbrella of the European Innovation Partnership for Agricultural Productivity and Sustainability (EIP-AGRI). This EU policy instrument aims to foster innovation by connecting farmers and researchers.

There are three specific objectives:

OK-Net Arable takes a very innovative approach in that in all stages of the project, farmers play a prominent role. Much more than being asked for advice, farmers contribute to a process of co-creation of knowledge throughout the project.

Context of the project

Organic farming in the EU has recorded substantial growth over the last decade, both in terms of production and market demand. The organic area in the EU has almost doubled since 2004; 5.7% of EU agricultural land is now under organic management. Organic farming is a productive form of agriculture which combines food production with care for the environment. However, concerns have been raised whether organic farming is also productive enough. On average, organic yields are 20-25% lower than yields of conventional farms. In addition, organic yields vary a lot compared to yields in conventional farming. This is often due to the level of knowledge of the farmer. Evidence shows that the more experienced the farmer is, the smaller the yield difference with conventional farms. Indeed, organic agriculture works as a complex system which requires a very high level of knowledge. But knowledge exchange between organic farmers and technicians remains limited. Also, the knowledge gap between organic farmers across the EU is considerable. By promoting co-creation and exchange of knowledge, the OK-Net Arable project therefore has significant potential to increase productivity in organic farming.

ORC is responsible for facilitation of knowledge testing with farmer innovation networks in the participating countries and will carry out this work in the UK with organic arable farmers. The overall aim of this work is to form an international network of existing regional farmer innovation groups and to better understand the success factors that make end-user and education materials effective and useful in a practical context.

A network of 14 Farm Innovation Groups was established across the partner countries. These groups of organic arable farmers and advisors enabled the sharing of knowledge and ideas on enhancing productivity in organic farming. These groups gathered for meetings to initially discuss the key challenges.
The first UK meeting was hosted by Richard Gantlett at Yatesbury House Farm. See photos. Weed control and soil health were identified as priorities by the UK group.

The second meeting of the OK-Net Arable Innovation Group was held at Abbey Home Farm, near Cirencester in 2016. where knowledge exchange tools – such as videos, decision support tools and apps on organic farming were assessed by farmers to provide feedback on how knowledge and information could be better shared. See photos.

Results from tool testing across all the Farmer Innovation Groups suggest that tools which provide details of the context, farmer experience and visual information were particularly well favoured. A full report on the results is available from Katie Bliss

Pulling together the best research and knowledge exchange tools on organic farming from partners across Europe http://farmknowledge.org/ is a hub for information on enhancing organic farming. See news item

The platform also includes new tools developed through the project including over 100 practice abstracts – 2-page summaries of key practices. A number of tools were also translated into English from partner organisations. See ‘Publications’ below for those developed by ORC or visit http://farmknowledge.org/ to see the full library.

The Farmer Innovation Groups were also invited to carry out some practical testing of knowledge presented or specific practices that addressed the issues identified by them. The groups submitted proposals that were reviewed by project steering group and feedback was provided before the actual testing started. In total, 11 practical trials were carried out. The results of this practical testing summarised here have been reported by the farmer innovation groups in the form of Practice Abstracts and/or Videos that are shared on the knowledge platform.

AIAB hosted a visit from the farmers from the ConMarcheBio (12 July 17) to the practical trials with terminating cover-crops and using the roller crimper in Friuli, carried out by them. The farmer saw the trial results on a two-farm tour and had the possibility to see some field operations and exchange ideas about conservation agriculture techniques applied in organic farming in Italy.

There was lots of positive feedback from farmers on the exchange visits and an appreciation for the opportunity to exchange with peers from across Europe. They suggested that more similar events should be arrange in future and many felt they were willing to pay their costs if the organisations were willing to coordinate the exchanges.

Key elements the farmers valued in the co-innovation workshops and exchange visits were the opportunity for direct visual observation, deeper understanding of the context in which the practice was being tried and discussing with other farmers and practitioners what worked and what didn’t work. This highlights that the things that farmers value in direct face to face exchanges are also what they are seeking in on-line KE tools. Videos, decision support tools and interaction on existing social media could thus provide useful mechanisms for taking KE online, if these elements of ‘in the field’ are integrated into online KE. Online KE cannot and should not be expected to replace direct face to face knowledge exchange, but there are opportunities to take these critical success factors online to complement sharing in the field to enhance KE and improve organic farming.

Download technical guide The Basics of Soil Fertility: Shaping our relationship to the soil or order hard copy here

All sources of funding:

This project has received funding from the European Union’s Horizon 2020 research and innovation programme under grant agreement No. 652654. This communication only reflects the author’s view. The Research Executive Agency is not responsible for any use that may be made of the information provided.